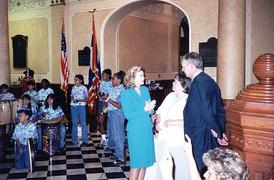 Patricia presenting for the Govenor and First Lady

of Wyoming and selected children of the state.

Teacher of the Year Award Speaker

While most people work at coming out of their shells, I sometimes wish that I could crawl into mine. I was born with a super outgoing personality so when I am passionate about something like literacy and have learned so much about it, I like to share. After speaking one place, someone recommends you and it's like a domino effect! Speaking to the governors' wives was really great because suddenly they were inviting me to speak across the country! Each experience is different and so very rewarding. I love when the audience is tough, such as when there are gang members in my audience. I know that if I have gotten through to them, then I have really connected and given them food for thought. And I have spoken to entire student bodies without a microphone! I have also…you don't need a speech here!

Bringing projects to life -- especially when I have been involved in the writing or creative process which is where I am told I shine is what I live to do. Nothing is more rewarding – unless chocolate is involved!

To continue to grow in my craft and knowledge and share that with those that express an interest in learning from me.

Patricia grew up around show business and counts among her mentors the creator of the Tonight Show, Steve Allen, and Cal Arts founder Jules Engel who worked with Walt Disney for 38 years as a chief animator and fine artist. Her godfather, Alfred Newman, scored many films and her family was in the prop business.

Patricia was profoundly influenced by her amazing family specifically her artist mother, Jackie, her teaching father, William, and her PhD. brother, Rusty, all of whom provided a nurturing and expansive environment in which to learn and grow.